WinIIr is an application for people having to design digital "Finite Impulse Response" (FIR) filters. 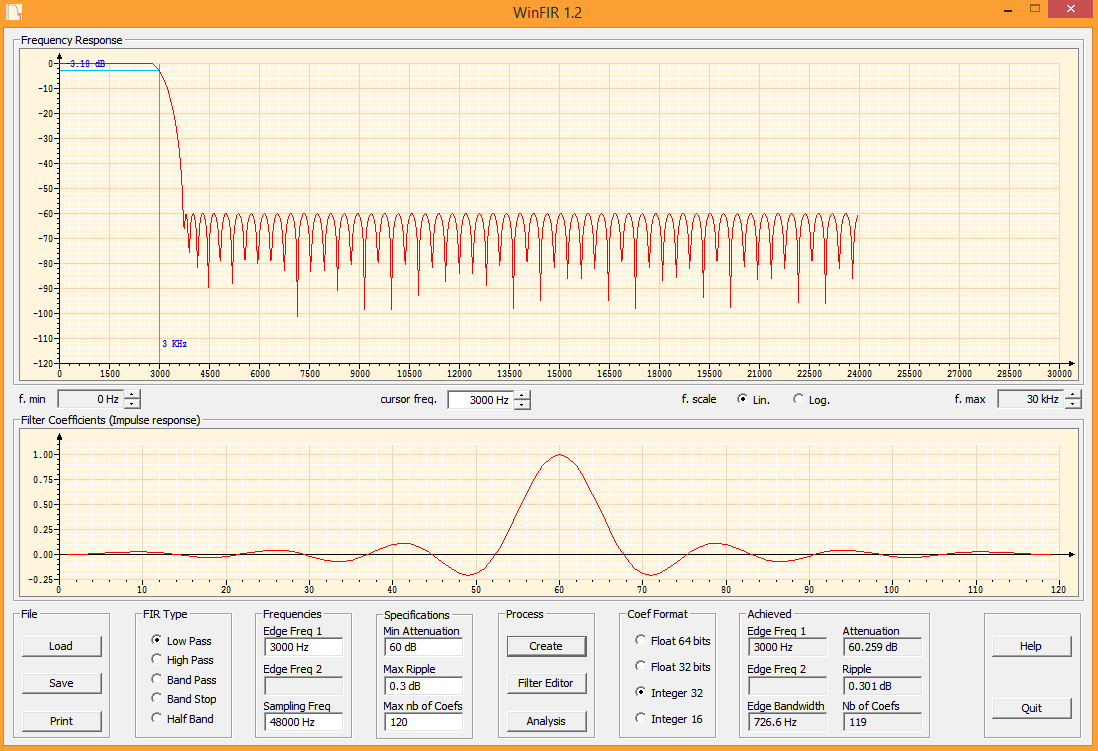 The upper diagram displays the Frequency Response
The user can adjust the upper frequency limit, and also the lower frequency on a linear scale.
When clicking on the graphic, a marker is displayed and it can be moved with the mouse.
The marker indicates the level (in dB) at the selected frequency.

Under the graphic showing the Frequency Response, a second graphic displays the filter coefficients.
This is only a coarse indication of their value and distribution, to get an idea.

Half-band filters  are often used for "Decimation" and "Polyphase" filtering.
They can be implemented  very efficiently since ((N-1)/2) - 1 coefficients  are null.

The edition boxes and the buttons used to specify the filter characteristics are located at the bottom
of the dialog window.
Clicking on the "Create" button starts the filter creation process.

Warning: creating a filter with a lot of coefficients will take a lot of time, up to several minutes,
depending on the performance of your PC.. Be patient!

Once that a filter has been created or analyzed the achieved performances are displayed (attenuation, ripple,...).

Hints: creating a filter is an iterative process. Sometimes, relieving the specifications permits to achieve a better filter.
For example, specifying a large attenuation or a low ripple for a filter with few taps is counterproductive.
Also, do not forget to have a look at the "Edge bandwith", a filter with a lower attenuation and an higher ripple
will have a narrower "Edge bandwith", this means that the transition between the pass band and the stop band will be steeper.

The editor is used to access the filter description and its coefficients in text format.
It is accessible through the "Filter Editor" button or through the "Analyze" button.
When opened, the text editor is automatically refreshed when the filter parameters are modified.

Here is an example of the, automatically generated, description of a simple "low pass" filter with 119 coefficients in 32 bit integer format. 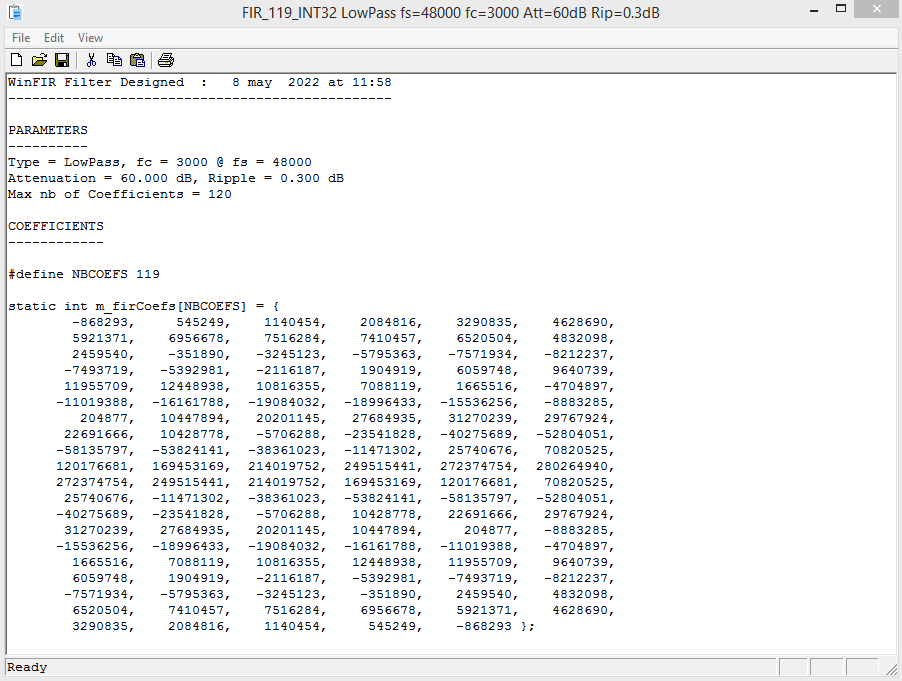 The process is interactive, you can modify the filter parameters inside the Filter Editor Window and Analyze it again to see the consequences of the modifications.

Example of a simple half-band filter 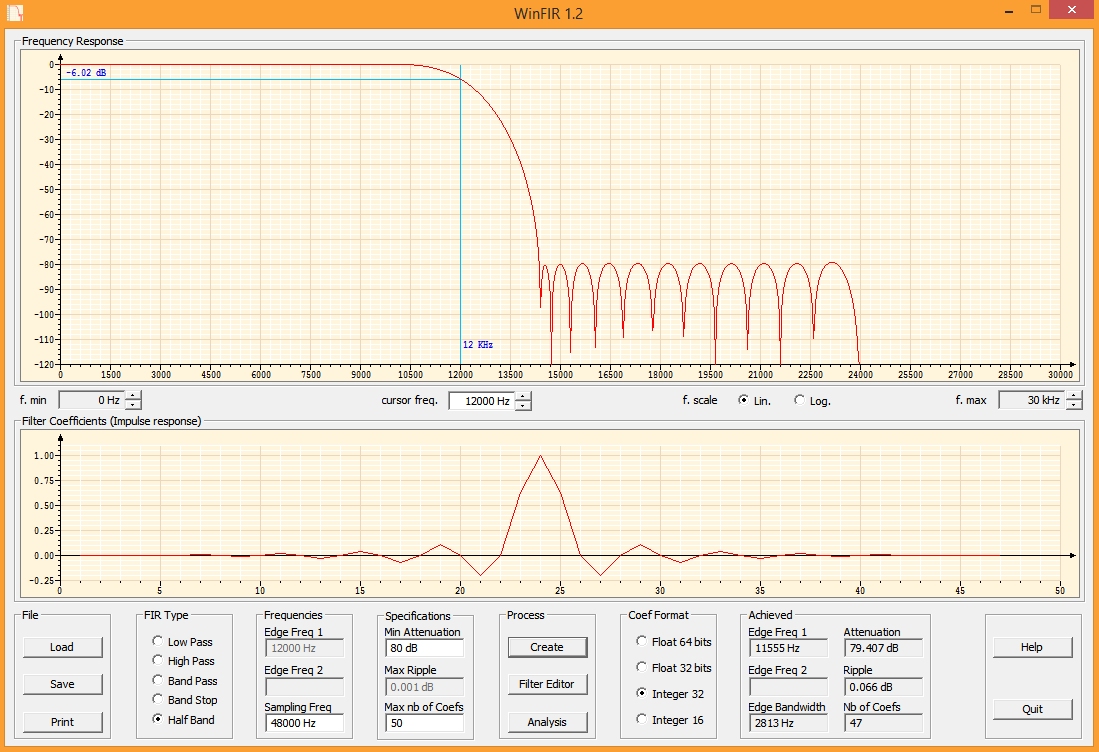 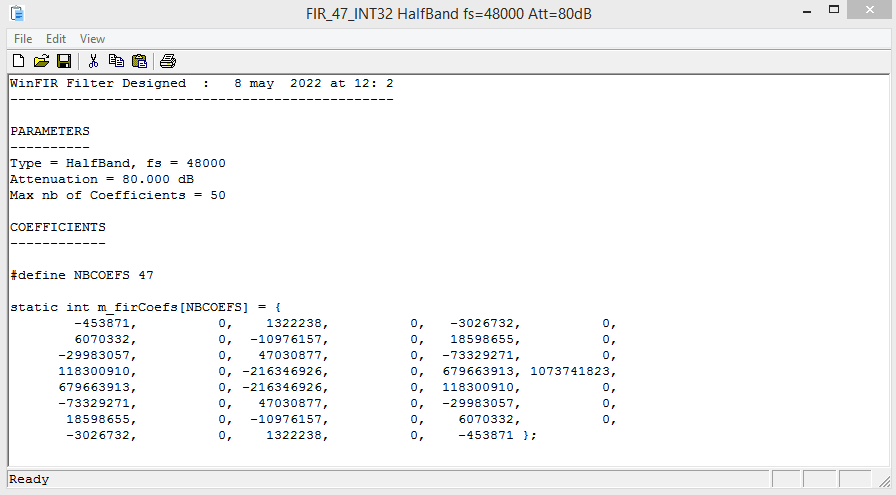 The documentation is available in PDF format (586KB): WinFIR.pdf

BACK TO HOME PAGE 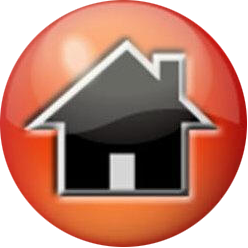